A lot of "Semantic Error" when building on Eclipse

i’m trying to modify the firmware using the eclipse IDE on windows, but when I build the project I get a lot of semantics errors, but only on the opened files. For example if I build the project without any files opened i get 0 errors, but if i open the axis.cpp file (as seen in the screensot) i get a list of errors related to axis.cpp. 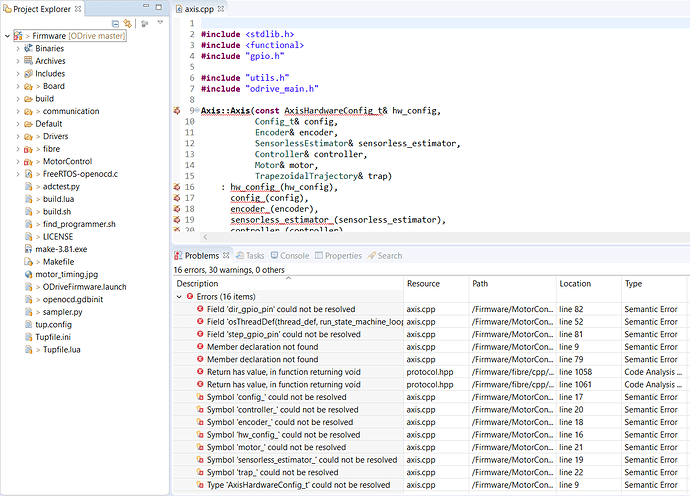 As anyone ever had this problem?

Indeed, using Visual Studio Code I don’t have this problem anymore. Thank you!

This is an IDE issue, Eclipse has a code crawler (CDT) that reviews and annotates the code with potential issues before you even compile. You need to tell the indexer what type of compiler you’re using, where the source and header files are and any extra macros that have been defined outside the project. This can be quite powerful as it can be used to build the project makefile and compiler options but as this porject is using Tup, it’s a bit of a pain. There are a few different ways to deal with these issues, ranging from turning off the indexer to filling in all the build details.