Blew up my ODrive. Some pictures

Dismounting my ODrive i knocked one of the capacitors on the underside of my board loose. I was lucky to have noticed, but my soldering skills suck. I have never done soldering on electronics before, but I tried. The result was pretty shitty, but it worked.

Expecting problems later on marked the board, so I wasn’t surprised when magic smoke and fire appeared during one of my test runs.

I’ve included two pictures. I’ve flipped up the capacitor so you can see the damage underneath the capacitor. Be careful when handling delicate electronics!

In the end I think my soldering of the capacitor held up. However the resistor C40 appears to have exploded, or at least caused sparks. Probably caused by some flux or thermal damage left over from my soldering. 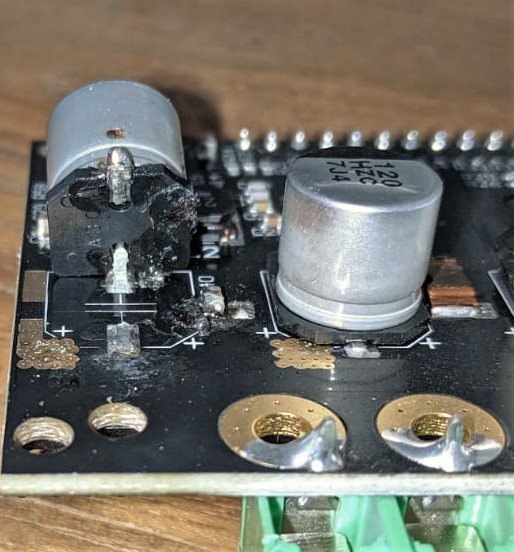 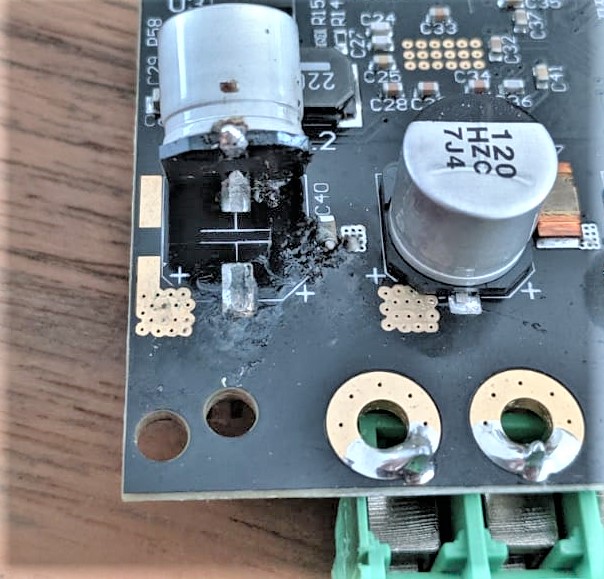 I have the exact same thing… did you fix this and get it up and running to normal again by using a new capacitor?

It should have been a pretty easy fix, but my skills and gear were not up to the task. I have a couple of use cases where I only need one axis, I will be using this board for that.

This is the 48V board

the resistor C40 appears to have exploded

Clue is in the component ID: C40 is not a resistor, but another capacitor! Probably an MLCC (multi-layer ceramic capacitor) in parallel with the large electrolytic polymer capacitor that you knocked.

It is possible that with reeeally terrible soldering you might have managed to short the positive side of C(14?) to the negative of C40, thus shorting out the whole DC supply with a blob of solder, but I think you would have to try really hard to do that?
More likely, the amount of flux you deposited on the tiny MLCC has caused it to arc over if you charged the board to 56V?
High voltage MLCCs fail in interesting ways, but I don’t know if 56V would be enough to cause arcing, even across 1mm of surface covered in flux. Dielectric strength of air is around 1MV/m ie 1000V/mm to arc in free air. Creepage or arcs along a surface (especially with contamination) is much easier, but still 56V shouldn’t be an issue.

Maybe you had whacked (and cracked) the ceramic cap C40 as well?

I think the flux caused a short across the mlcc cap. There was a spark and some smoke, and the flux appears to have turned into ash. I didn’t clean up the flux that wicked underneath the big cap.

Also, the big cap doesn’t appear to have any damage, apart from the leads being ugly.