Hi,
I am a Master student of Mech. Engineering, currently working on my master thesis.
A brief introduction to put my questions in context:
I will be using the ODrive (as of now I have the 56V, 3.6 version and two 5056 PM brushless motors) for the TORQUE control of a wheeled self balancing robot (similar to the Ascento, to make myself clearer). I stress " torque "control because I will be using some advanced MPC techniques and the natural inputs to the system are the wheel torques; therefore I need to control the torque as precisely as it is possible. I will then probably integrate the system using ROS and I plan of using a Raspberry Pi 4 B as the onboard computer (probably, I am still at an early stage).

My questions are directly meant to be answered by the creators of ODrive but please, feel free to contribute if you think you can.

During my degree (actually pretty recently) I studied some control strategies for PM machines (also for IM) and, in particular, FOC. My questions are directly related to the understanding of the current torque loop control implementation on the ODrive.

This is a not negligibly lenghty list of my questions:

I hope I didn’t make too many questions for a single discussion.

The following is an image of the control strategy I am referring to. I’d like some feedback on the differences between this and the one the ODrive implements. I hope it will be pretty much self-explanatory (P/R indicates a polar to rectangular transformation and R/P vice versa) .

Ok, big post! I’ll address them one at a time:

Looks pretty similar to what we have in devel - only small difference is that we only measure 2 shunts and use KCL to derive the 3rd. Speed observer exists but doesn’t currently use torque to estimate the speed (no motor inertia estimate)

First of all, thanks for your fast response.
So you assume an isotropic machine. However it is not so clear to me why, since you assume L_q=L_d, during my past test I was reading an I_d different from zero (in the sense that it is not negligible compared to the shunt noise you were referring to). These days I will conduct a simple static test with a precision weight scale and a 3d printed arm to measure the torque I can output from the 5056, the resolution of the commanded torque and how the commanded torque is close to the real one. It might well be, since I am new to ODrive, that during my previous tests I was hitting one of the limits; this time I will set a reasonably high current limit and vel limit and I’ll see what happens.

Please let me know on point 2, when you have time; I would assume, since L_q=L_d, that the current loop simply makes use of the torque constant of the motor. If that is the case, comparing the “real” expression with the one suggested in the Docs, the following relationship should hold: 3/2P_pairsPM_flux=8.27/Kv. Does someone know the reason of such a relationship between the “real” torque constant (assuming an isotropic machine) and the one proposed one in the documentation (on the left of the =)?
If you assume L_q=L_d as you are saying, this would mean that the i_d setpoint would always have to be to 0, since this component does not generate any useful torque and only contributes to the Joule losses in the winding. Is that correct?
Also, since the ODrive measures the quadrature and direct axis inductance (L_q and L_d) to achieve critical damping, why not use them to compute the full expression of the torque? That way the assumption of isotropic machine would not be needed anymore. The only problem I see is that, to compute the optimal i_q and i_d (which now is different from zero) one would need to employ something like the MTPA algorithm for choosing the right current amplitude and phase in the qd0 frame.

When you say that the scheme is something similar to what is in devel, does it mean I can use it if I flash the right devel firmware on the ODrive? Or is it still not a stable/completed firmware version?
It appears to me that the devel version of the firmware implements some more advanced control features; how can I flash the devel firmware to my board (I have an ST-link)? I am quite new to this and I am finding the Githib page a little disorienting. I would really appreciate some directions on how to use the GIthub page to flash/modify the firmware. Any reference to a guide is also much appreciated

If you assume L_q=L_d as you are saying, this would mean that the i_d setpoint would always have to be to 0, since this component does not generate any useful torque and only contributes to the Joule losses in the winding. Is that correct?

Also, since the ODrive measures the quadrature and direct axis inductance (L_q and L_d) to achieve critical damping, why not use them to compute the full expression of the torque?

We only measure the inductance in one location, and then assume L_q = L_d = measurement.

I would really appreciate some directions on how to use the GIthub page to flash/modify the firmware.

We have a firmware developers guide on in the docs!

It explains everything regarding how to get started with modifying, flashing firmware etc ODrive Firmware Developer Guide | ODrive

Regarding point 2 from earlier:

Paul: Does ODrive use MTPA?

Oskar: Not really. I mean yes in the sense that if Ld = Lq, then Id = 0 is MTPA, but yeah nothing that is optimal for a non-isotropic motor.

You should join us on the Discord, there are quite a few motor designers and robotics people who hang out there.

Thank you very much for clearing up my doubts. I will join the Discord server for sure.
I did the tests on the torque control resolution and the preliminary results seem quite good: I am able obtain at least 0.01 Nm resolution. I didn’t push my trials at higher resolutions, since my measuring apparatus is not so reliable.
However, I am obtaining a possibly strange behaviour from the 5056 motor in torque control mode.
I measured the static torque produced by the motor by holding the rigid arm which is attached to the shaft still against a flat surface.
When entering the closed loop control (after having set the torque control mode) and throughout the whole test there is an audible noise from the motor.
This reflects quite evidently in a noisy behaviour of the measured torque, which is clearly visible in the Liveplotter; however, if I turn the shaft slightly one direction the noise is greatly reduced (both audible and in the measured torque). There’s this strange anysotropic noise.
You can see this phenomenon in the following picture, where the moment the noise goes down is clearly visible: 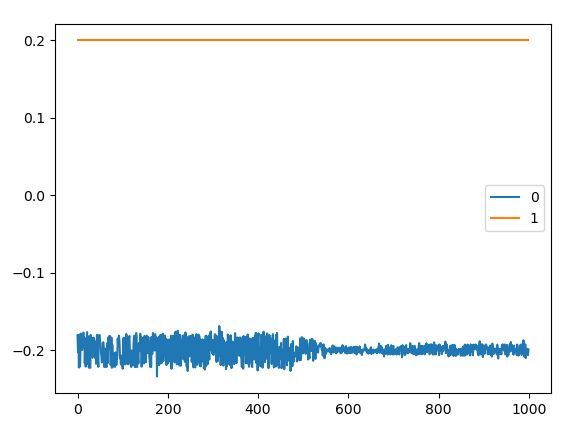 Does someone have an idea why it happens and if it is solvable? I would expect something like that if the FOC wasn’t working properly and the PM_flux axis wasn’t properly synchronized with the rotating field; however I don’t think this is the case, since the encoder has a much higher resolution compared with the degree step I have to impose to the shaft in order to cancel the noise.

Ps.
The fact that the input torque (orange) and the measured one are of opposite sign I think is only a plot problem (I hope)

When entering the closed loop control (after having set the torque control mode) and throughout the whole test there is an audible noise from the motor.

Yeah, you need to plot it * encoder.direction I think? It’s kinda funny like that.

I see. But it is strange that the amplitude of this noise depends on the rotor position. If this was due only to encoder/meas. noise I would expect the amplitude of the noise to be more or less constant wrt rotor position. Are you sure that this is not a symptom of something else? Did someone encounter this behaviour previously?
Consider that I have shielded the encoder cables with this (I have wired the cables myself since at the time of my purchase the encoder cable was not available): 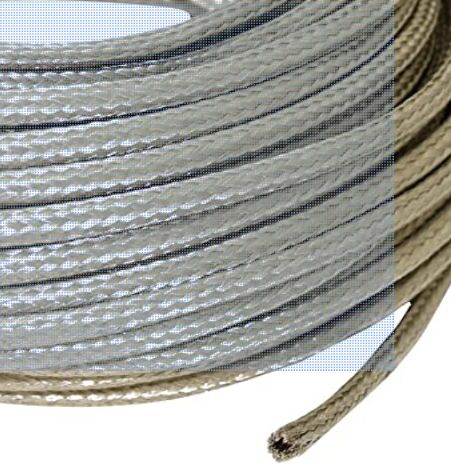 I stress that the noise is not only in the measured signal but manifests itself also with an audible noise (similar to the noise the motor makes when using position control with non-tuned loop gains).
I would exclude encoder noise due to improper wiring, since during position control I don’t get a noisy signal, rather a well conditioned one.

Yes, the audible noise comes from the current shunt measurement noise. This is well established. You can set motor.config.requested_current_range to a smaller value if you want to reduce it.

Perfect, thanks again. During the test I left the current limit to 10 A, which was never exceeded. So I think reducing the current range will not be of any help, but I’ll try it anyway. By measuring the torque with an external device (external weight scale with a resolution of 0.1 g and a 3d printed arm with 10 cm distance between shaft and contact point) it seems however that this high frequency noise is somehow filtered by the dynamics of the motor, which pretty much exerts the correct value of the torque. Might also be due to a filtering of the weight scale, but I’d exclude it since that configuration of the scale gives me a theoretical measuring sensitivity of approximately 10^-4 Nm.
I read somewhere in the forum that shunt resistors are replaceable. Should I need less noise, is it something advisable and, more importantly, achievable via a simple soldering iron? Do I need a better equipment? How do I select the new resistors?
In future versions of the board, have you considered using different hardware for measuring the current to increase the performance of the current sensing (for example hall effect transducers)?

Thank you for the very well formulated questions. I’ll start by answering your initial set.

I think the audible noise is pretty much entirely due to the current sensing noise, and probably almost nothing from the encoder. You can try setting motor.config.requested_current_range = 25 and then save config and reboot. This sets the current sense amplifiers to a higher gain which gives a higher voltage signal to measure, which reduces the noise somewhat.

In future versions of the board, have you considered using different hardware for measuring the current to increase the performance of the current sensing (for example hall effect transducers)?

Better current sensing performance is one of many key improvements of our next generation hardware.

Thanks Oskar for you very punctual replies. I think your answers and Paul’s ones clarified the vast majority of my doubts/curiosities.
There’s only one thing I can think of which is left. How is the estimation of the L_q (or L_d, since you assume isotropic machines) carried out practically during the motor calibration?

For measuring L (= Ld = Lq), we simply emit a squarewave voltage along the alpha axis in the stationary frame, and look at the current response also along alpha. The rotor angle is not considered, so we don’t know along what rotor frame axis (angle in dq) we measured.

I see, understood. Thanks