Is it possible to replace an AC Servo Motor?

I’m reading all topics and documents about BLDC and ODrive, but maybe I didn’t get it right, so I decided to create this topic.

I’m taking a look at this BLDC Motor:

I currently have an Omron AC Servo Motor, the driver has burned out and it is extremely expensive to repair or replace it with a new one.

example of the setup: Is it possible for me to replace this AC Servo Motor with this BLDC from the link above?

What would be the positive and negative points?

i take it the AC servo is 2 phase?
if it’s 3 phase, ODrive might even drive it directly. Slowly but at full torque.

4kW is a little high for ODrive though. You’d be right at the top of (or over) its working current range at 95A.
You could come down on kV a bit and use a 55V supply, which puts you at 72A for 4kW at the same torque…
Do you need the full 4kW or could you cope with less than full torque at the higher speeds?

I`m using that with my CNC Mill, I use that to milling steel and aluminum, I believe I need full 4kw

It has an encoder connector, could this encoder be used by oDrive too?

My idea was to replace it with a BLDC equal to the link in the previous post. But if there is any possibility that ODriver will work with this AC Servo, it would be very interesting

It’s likely that it would work (to a limited extent, since ODrive is limited to 56V). Do you know if it’s an induction motor or a Permanent Magnet Synchronous Motor? (ODrive has support for both, but AC induction motors are highly experimental)
The encoder could be Hall sensors (if it’s a PM synchronous motor) or it could be an incremental encoder, or it could be a tacho. How many wires does the ‘encoder’ have?

Is this being used as the spindle motor? What (apart from the Encoder) makes you call it a “servo”? Is it labeled as such?

Yes, it is being used as the spindle motor, It is labeled as such

Well, I believe that is a Permanent Magnet Synchronous Motor

About the encoder wiring, I don’t know, because the datasheet is different from my servo lol (maybe my servo is an old version) 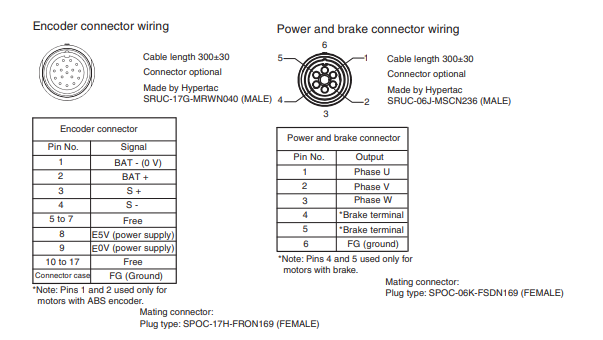 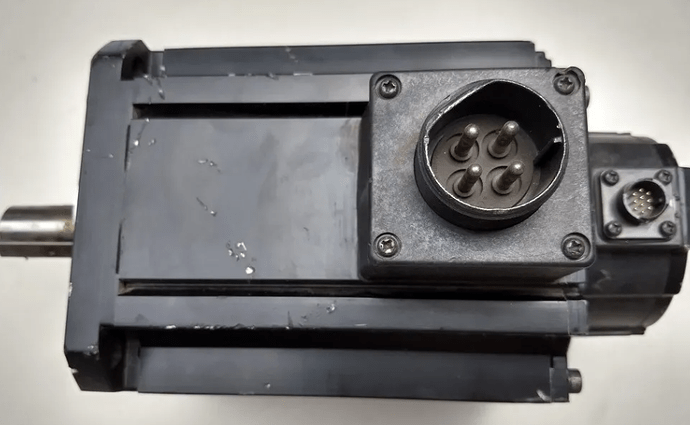 Oooo, that’s a strange kind of tacho.
I expect it might be a sine or pulse train tacho on the S+/S- wires. Not something that ODrive supports out of the box, sadly, but certainly something that could be implemented.

If you can unscrew the tacho, you could fit a different encoder easily. but you’d still have trouble running the motor more than 1/4 its original speed, due to the voltage limitation of the ODrive.

You could even try running the ODrive in ‘sensorless’ mode on that motor. Again, it’d be slow, but you’d likely get its full torque.

yes, I have an oscilloscope, I will try to do that tomorrow.

Unfortunately 1/4 of the speed will not work for my CNC. I would have to increase the gear ratio and lose more torque.
A curiosity, what prevents increasing the voltage in ODrive?

@towen returning to the original idea, that BLDC motor with a torque of 9Nm, do you think it is possible to replace an AC Servo as a spindle motor?

Would it have the same performance as an AC Servo Motor with 9Nm of torque and 3000rpm?

For your requirement of as much torque as possible and able to reach 3000 RPM, I would suggest to aim for a motor with a Kv of around 80, and able to eat 80A continuous. As hobby motors usually list peak current not continuous current, you should look for a current rating of around 120-200A, depending on how you plan to cool this.

A suggestion would be a H12090 80Kv motor. Also if you wish to use ODrive for this, please make sure to cool it very well.

A curiosity, what prevents increasing the voltage in ODrive?

returning to the original idea, that BLDC motor with a torque of 9Nm, do you think it is possible to replace an AC Servo as a spindle motor?

Would it have the same performance as an AC Servo Motor with 9Nm of torque and 3000rpm?

There is fundamentally no difference between your AC Servo Motor and a BLDC motor. Both are Permanent Magnet Synchronous AC Motors. The “DC” in BLDC is a very annoying misnomer as they are not DC at all.

Only the power handling (voltage and current capacity) of the ODrive.

I seem to remember there was talk a while back of using both axes in parallel on the same motor, but you need special software support to synchronise the PWM on the channels - you can’t just connect it up in parallel, or else it will go bang. That would allow you to have maybe 150A at 55V which would be 8kW, in theory. But even then I probably wouldn’t run it more than 5kW due to heating of the ODrive PCB. 150A is a lot of current for copper traces, and don’t forget that heating goes with the square of current. This is why high power devices normally have high voltage, not high current.

Yes, you can easily replace the AC servo motor and get it replaced by the one that has proper efficiency output. You can contact servo drives repair to get it done.
Thanks.