I was running some thermal tests on an ODrive v3.6 56V. The maximum current I tested was 25 A which is below the allowed levels according to the specifications. Additionally, I was monitoring the temperature through the thermistors of the MOSFETs, which didn’t exceed 45 °C.

However, after turning the board on again the next day, the motor wouldn’t calibrate and I was getting the following output from dump_errors(odrv0). 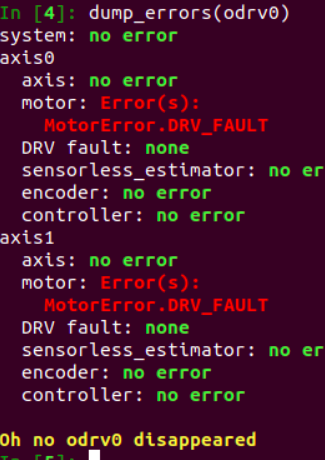 I tried erasing the configuration, flashing the latest firmware, clearing the errors etc. but it didn’t fix the problem. Also the drv8031 chip seems to get hot shortly after I connect ODrive to power.

Does this mean that there is a short circuit somewhere? And if yes, is it repairable, or I’m going to need a new board? Also, is there any idea on what may have caused it? I’ve been working with ODrive for some months now and there wasn’t something different from what I usually do in my setup.

Thank you in advance

Sounds like something shorted the 5V or 3.3V rail. Does your STM32 or the LDO 3.3v regulator get hot?

Yes, I just checked and the STM32’s temperature rises the moment I connect it to power. If the case is the one you described it is probably due to an SPI encoder I used, even though I’m sure when the short-circuiting happened. Is there a way to know which component needs replacement?

It’s probably the STM32 if it’s getting hot. What we think happens is you get a ground loop and then you get current injection through a GPIO pin. Ground Loops — ODrive Pro Documentation 0.6.3 documentation