Plugging-in oDrive for first time - will it fry?

Hello, I have an oDrive 3.6 56V board, and a 54v li-ion battery pack, it will be running two hoverboard motors controlled from Arduino Mega.

Do I have to set up the oDrive board to enable it to accept 56v, before I connect it to a battery?

Is it safe to connect my oDrive to a battery before it’s been ‘set up’ using whatever tool will work? 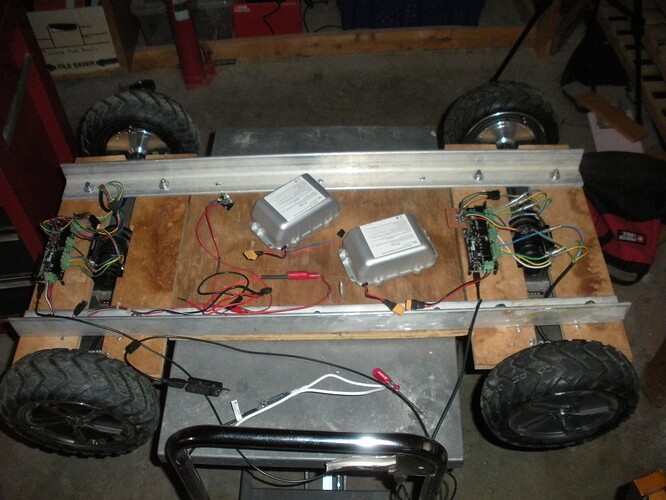 What are those breakout boards you’ve attached to the oDrive boards?

To answer your question
My Li-on pack reads 52-54v on the voltmeter.

I believe your referring to the encoder inputs. Those are 22 nano farad caps to suppress noise (ground loop generated mostly) on the A B Z encoder inputs.

If your Li-ion packs are fully charged you may be fine. I have been in electronic repair for a few decades and have seen the damage caused from voltage spikes that exceed the specs of semiconductors. With out seeing the specs on every semiconductor on the Odrive; I am opting on the side of caution. My controller (Jetson Nano) runs on 5v which I obtain from a buck converter; when running on 24 volt system I had a 24v buck converter rated at 36v input max so when i decided to go to 36v system i purchased a 36v to 5v buck converter with a rated input of 50v max. Another reason I am staying at 36 volt. Buying electronics is getting harder with scarcity of parts and inflation so to keep my projects moving forward I tread cautiously.

Ah, I saw those mentioned in the ‘Pro Hoverboard’ docs. I need to grab some of those! I was going to supply my Arduino Mega with 9v, as It’ll also be running MPU6050 and ADS1115 which have been reported to fluctuate of ‘stall’ their outputs if there’s a peak in power-demand. As with your project, the consequence would be a big crash, personal injury, not just a little table-top bot toppling-over.