Hey guys I’m running into to problems using a 470 milliOhm resistor with my 3.6 56V ODrive.

The included 2Ω resistor works correctly but since I’m using 24V bus voltage I can only push ~8A through it (0.9 * 24V / 2.55Ω = 8.47A).
I also used an ESR meter to measure the resistance at the ODrive’s brake terminals to verify the resistors (measured values below).

Note: I also tested the 100W 0.47Ω resistor with longer leads on three 3.5 24V ODrive boards. They all worked correctly with no problems (with same odrive config values). 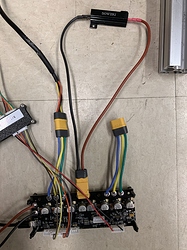 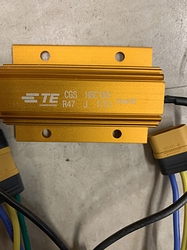 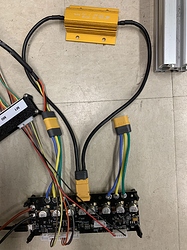 Regardless of what resistor I use I can calibrate correctly and enter closed loop. The problem comes when I try to move a load vertically upward (NOT when braking).

The strange part is, in all cases I get ERROR_CURRENT_LIMIT_VIOLATION. Checking the code, the brake resistance should only throw brake duty cycle errors or trigger a DC bus overvoltage error if too much current backflows. Neither of these happen.

Like I said, the included 2.2Ω brake resistor works fine, the 0.47Ω resistors work fine on the 3.5 24V ODrives I have, and interestingly if I just remove the resistor entirely the problem also goes away (although I obviously can’t decelerate).

Is there any physical change on the 3.6 56V ODrive that would cause this?

Hmm. Shouldn’t be, but it might be a good idea to change your motor.config.requested_current_range = 8 and then save and reboot. This should give the current controller better control at low currents. A higher bus voltage represents a higher control gain and could affect the closed-loop stability