I’m getting unrealistic current measurements for my setup, suggesting a reduction in current required to spin a motor at higher speed (i.e. negative viscous friction). This obviously makes no physical sense, and I am suspecting a current measurement issue.

I am running in velocity control, with default gains increased by a factor 2 (although this does not seem to matter). My data, on ramping velocity reference slowly, looks as follows: 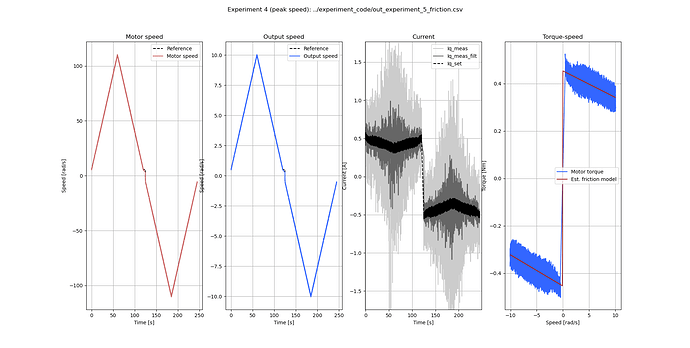 current_measurement_issues1920×969 128 KB
with plot 1 the motor velocity, plot 3 the current (reference, measurement, filtered), and plot 4 the speed-torque curve, using motor velocity, current, and the known torque constant. Note that plot 4 uses the current reference, but the measurement shows the same behaviour. Clearly, current magnitude appears to reduce as speed increases , which is not physically possible. Notably this happens at relatively low velocities already (below 50 rad/s or 8 rev/s or 477rpm), which is why encoder limitations don’t seem too likely.

What I have tried:

My suspicion is something with either 1) encoder filtering, 2) encoder phase lead/lag, 3) current filtering in software (would have to be before the abc->iq transforms, given that in q-frame current should be slowly increasing with velocity), or 4) issues measuring rapidly changing currents in the phases.

Help would be greatly appreciated! I’d think current measurement is important for many users.

Hi! Sorry about the long delay.

Have you checked the Id_measured value?

That curve is pretty weird, I would also expect a positive sloped friction value. Even if you model it with a stribeck curve, it doesn’t really make any sense (the negative portion would be tiny in a motor, right?)

I’m not entirely sure what would cause this behaviour electrically. I’ll ask @madcowswe about it, very interesting question! And nice graphs 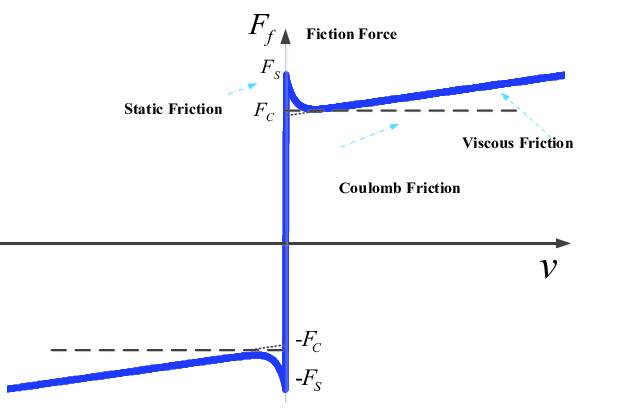 Very interesting. We never characterised the current amplifier group delay on ODrive v3, so my guess is:

What phase_inductance is your motor? Can you try with a motor with significantly different inductance?

Thanks for the replies guys! Also a little slow here, Christmas and whatnot

@Wetmelon I have not looked at i_d at all, I’ll do that right after new year’s

Indeed the Stribeck curve should be very, very narrow - way below the speeds we’re seeing here. We should essentially see Coulomb and viscous friction terms.

@madcowswe This is a T-Motor 8012: Antigravity MN8012 KV100_Antigravity Type_Motors_Multirotor_T-MOTOR Store-Official Store for T-motor drone motor,ESC,Propeller
They don’t quote an inductance value, but I’ve checked a few of my config exports and the estimated value ranges from 3.14e-5 to 3.25e-5 H. The quoted internal resistance is 85mOhms, and the estimated value lies around 76-79 mOhms. This should yield a time constant of 397-427 us. Does that offer any insight?

Unfortunately I don’t think I have another motor with encoder on-hand.

Hi guys, back with some more data

@Wetmelon I’ve done some tests with measurements of d-axis current. Both velocity and position controlled, which yielded some interesting results.

First a run similar to before, again motor only, between what would be -10 and +10 rad/s at the output: 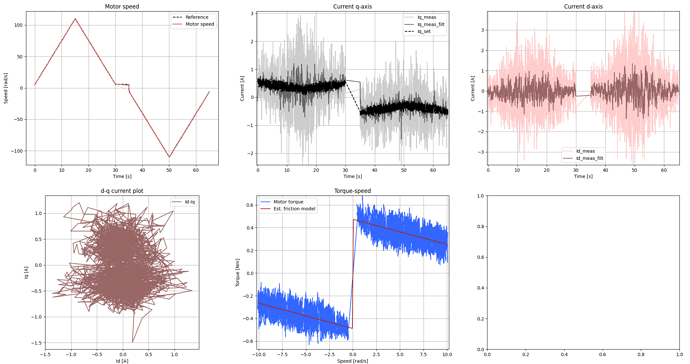 and some slightly longer duration, between -20 and +20 rad/s at the output: 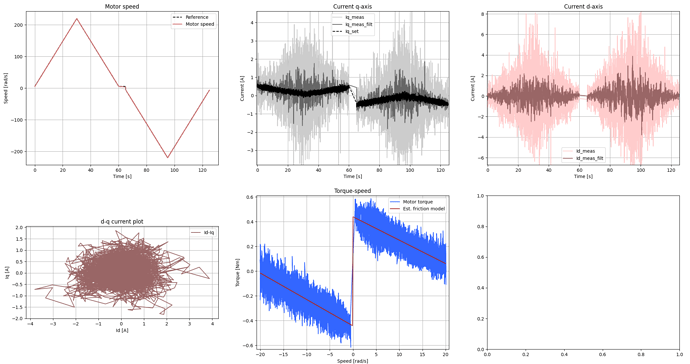 The Id current appears to be all over the place here, reaching magnitudes higher than the q-axis, even. These speeds are barely up to 50% of the encoder’s rated speed (4000rpm according to the encoder guide).

I’ve also done a positioning test, where I move it around a little and deflect it from its desired position by hand: 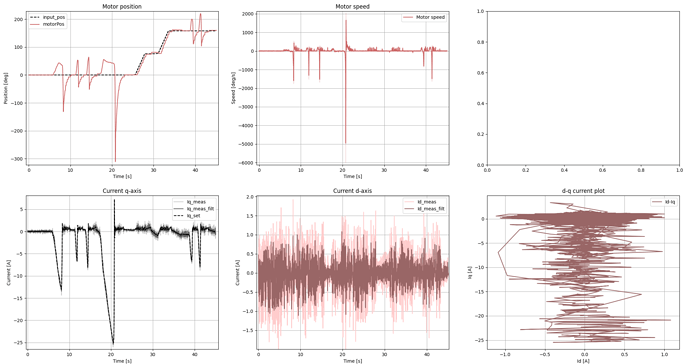 Interestingly, in this case the d-axis current barely moves at all (comparatively speaking), even in the brief instance where VERY high speed is achieved when I hold the motor off-position for a while and the integral term builds up. At 25A the motor is launched back to the setpoint at up to 5000 deg/s. Yet d-axis current does not move, at least not in the sample time that I can manage over serial.

One thing that does strike me is that the motor spent a lot of time stationary, around Iq = 0, and that d-axis noise seems to be significantly higher than that of the q-axis. I’d expect essentially a circle in the d-q current plot (bottom right), but it’s more like a horizontal ellipse.

The Id current appears to be all over the place here, reaching magnitudes higher than the q-axis, even. These speeds are barely up to 50% of the encoder’s rated speed (4000rpm according to the encoder guide).

This sounds like this motor / encoder combination is giving the odrive trouble (common for T-motors). I don’t suppose you can spin the motor and measure the backEMF to check if it’s properly sinusoidal?