Broke my 56V board, need some advice! 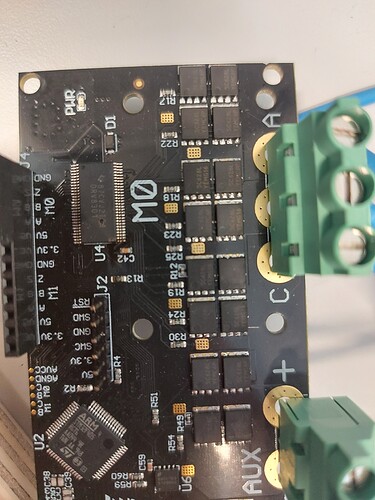 Before this happened the board was working fine (postition, velocity and torque mode). I tried running the motor with the other 3 terminals but that doesn’t work either.

Does anybody have an idea of what might have broken and why? Any suggestions are welcome!

@r91 from your picture, It looks as if either the PVDD1 pin of U4 or the capacitor C42 has exploded. This pin on the chip, and the little cap take the full DC bus voltage from your powersupply. It’s possible, if you have an excessively large power supply (with very large output capacitance and very low internal resistance) that if you suddenly connect the board with the DC power supply already turned on, there will be a huge inrush current into the ODrive. Such an inrush wave could end at this …

edit: by the looks of your U4 chip I’d say it’s most likely 1: inrush surge. Was there a spark when you connected it? Are you using a power supply or a battery, and at what voltage?
If you are using a 56V supply then you have to be very careful, as the absolute maximum voltage for the chip is 60V, and if it exceeds that even for a nanosecond, there will be an avalanche breakdown which causes the chip to explode. When that happens, a lot of current will be drawn from the PVDD pin in the corner of U4, which would explain why that is also charred.

First of all thanks for the answer!

The board was connected to a power supply which was 53 V. The spark happened when the software had just been uploaded to the board, the board was either changing hardware configurations or starting to calibrate (the beep didn’t happen). The board was also in a dust free environment, the second option is therefor not possible.

@Auke you’re right, if the power supply was already on, then an inrush surge is not possible.

However 53V is pretty high. Is it possible that the drive went into regen and was unable to dump the stored energy? (did the motor move at all?)
Is it possible that your PSU had high ripple or a control wobble, and momentarily output 60V? (I normally set an overvoltage lock-out on my PSU at 55V just incase anything raises the bus voltage to dangerous levels)

Otherwise, especially if this was immediately after or during a software update, then it could be the ODrive itself at fault. one of the devs eg @Wetmelon might shed more light for you here

From what I saw the motor did not move. How stable the PSU is I am unsure about. To use an overvoltage lock-out seems like a good idea for the next time!

Unfortunately I don’t have any good ideas, I will forward this on to the appropriate authorities

Given the circumstances you described, I can’t see any particular reason why this would happen.
@Auke Can you please email info@odriverobotics.com with your order number and a link to this thread, and we can send you a replacement.