Can I mount a CUI102 encoder on a moving frame 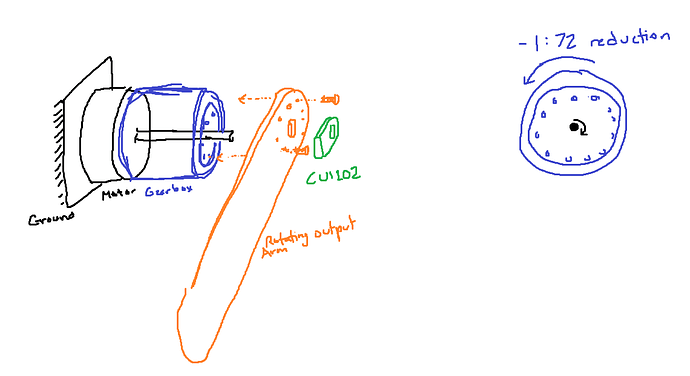 Bought a set of ODrives recently and looking forward to using it to control a BLDC motor. Haven’t tried the software yet, as I’m still designing the gearbox my motors are to drive.

Due to space constraints it’s becoming problematic to mount the CUI102 encoder beside the motor itself. I had the idea of mounting the encoder on the output stage instead; the shaft of the motor extends all the way through the gearbox and is accessible (image included). The gearbox will have a -1:72 reduction; if the shaft turned 360 degrees clockwise the encoder housing itself would move 5 degrees in the opposite direction. So when the motor makes a full CW revolution the encoder would read that the shaft has turned CW 365.

If the ODrive can account for this, my design work becomes a lot easier since I won’t have to sandwich the encoder between the motor and the gearbox. I saw in a related topic about mounting the encoder on a driven shaft that there is some scaling involving pole pairs. I think my setup results in a sort of 73:72 pseudo “gearbox”. As an aside, my BLDC is an outrunner with 12 stator slots and 14 rotor poles.

Is my design idea viable? What kind of setting would I have to change in the software? Thanks for taking the time to read this inquiry.

The gearbox will have a -1:72 reduction; if the shaft turned 360 degrees clockwise the encoder housing itself would move 5 degrees in the opposite direction.

So the encoder is moving 365 degrees per rotation, relatively speaking? That should work, I guess?? Worth a try anyway. Your encoder cpr will be = actual_cpr * 365/360

Thanks; I’ll give it a try.