Yeah, ignore the software thing, turned out to be fine how it was. I assume the encoder is in 3.3v mode?

Hmm no, I haven’t moved any resistors, and it is supplied with 5V. So it is in 5V mode.
But then again, it always was.

I suppose it’s possible that it was just on the edge of working before.

It should be TTL levels in 5v mode but who knows. Maybe try running it in 3.3v mode?

It’s quite a faff moving those 0203? resistors and I’ve already destroyed one board trying. I’m sure it is supposed to work in 5V mode.
Do you know what the reasoning behind having the inline resistors in SPI is?

Yeah, they slow down the slew rate of the SPI lines, it’s supposed to help with ringing

Hi,
I have had similar problems with the AMS encoder for a while now and fixed it now by ignoring the errorflag that is received. I added a:
bool ignore_abs_ams_error_flag = false;
to Encoder ::Config so the error is not ignored by default. Would you like me to make a PR for this? It seems a lot of people have trouble with this encoder and this might help at least some of them. If yes, which branch should I merge into?

@grahameth - I did something similar, but just ignored the error flag and didn’t make this configurable. I just wanted to add a “thumbs-up” to having your config flag available in the standard codebase…

Did you by any chance look into what it would take to actually clear the error flag when it happens? I started to look into it - clearing the error flag should just entail reading from register addr 0x0001. However, given the way the chip works for reads (the requested data is available on the following read) I wasn’t comfortable with the amount of changes that would be necessary in the current firmware to follow through on it.

In a ‘perfect’ world I think this would be the best solution - when an error is flagged, don’t use the reported position value (even though it seems to be valid) and issue a cmd to clear the error (read from 0x0001), ignore the subsequent response to this cmd, as it’s not a position report. If all is well the next position report should be ok.

Hi kizmit99,
thanks for the thumbs up

Yes, I also initially wanted to fix this “the right way” by sending a command to the chip, but I couldn’t figure out how. The changes to the codebase would probably be quite involved, but I didn’t spend too much time looking into it. Also, since the official guide suggests to connect MOSI directly to VDD, I didn’t want to undo that (it would be quite a hassle in my setup). That said, if the official developers would prefer this, I can look into it again.

Please send us a pull request targeting the devel branch (or 0.5.2rc1)

An update to this: Ignoring the errors does indeed help (I haven’t tried Graham’s code, but I put in my own change):

could maybe do with a variable spi_error_tolerance or something.

The other thing that has helped a LOT is to run the AS5047p on 3.3v instead of 5v.
The only reason I can think of for this to make such a difference, is if there is a lot of noise on ODrive’s 5V rail.
So far I have not moved the resistor for 3.3v either - it seems to work fine regardless.

I have come back to this and I’m getting some really weird behaviour.

I have been using incremental mode for a while now with no problems at all (that I can see) so I’m pretty sure it’s specific to this SPI problem.

I am currently unable to run the AXIS_STATE_FULL_CALIBRATION_SEQUENCE all the way through because spi_error_rate jumps too high. So I have followed all the suggestions I could find on this thread and others to try to reduce noise.

What I’ve noticed as I was trying these is that for a few moments, each change would appear to be an improvement. Then, all of a sudden, that improvement would be ‘undone’.

This was especially noticeable with the ferrite ring. There, the error rate fell to pretty much zero. It stayed that way for one or two first-halves of a calibration cycle (which wasn’t finishing due to an unrelated config error I found and fixed.)

But then, all of a sudden, it was as if everything suddenly went back to its pre-ferrite-installation behaviour. Ie - the error rate shooting up straight away and the calibration cycle erroring out with ENCODER_ERROR_ABS_SPI_COM_FAIL

I had made no changes at all to cause this. I was simply running odrv0.axis0.requested_state = AXIS_STATE_FULL_CALIBRATION_SEQUENCE followed by dump_errors(odrv0,True) over and again, just as I had been before.

Further testing confirms that I can reliably get one single bad half-run, if I wait ten minutes after the last failure, and any subsequent tries (without waiting) end in immediate failure.

Here is a screenshot of the “bad but trying” calibration run: (Sorry for the poor quality.) 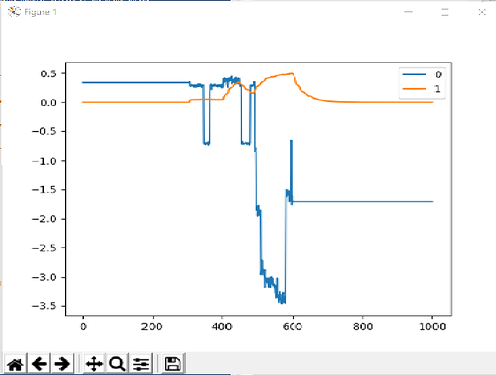 spi_error_rate is orange, pos_estimate is blue. 0.5 is the post-@towen bomb-out threshold for the spi_error_rate, so once the orange line gets higher than that the Odrive errors out. I don’t know why the pos_estimate is glitching out like that, unless comms noise is able to do that.

Here is a screenshot of what you get every time, if I run the calibration cycle again without waiting for ten minutes: 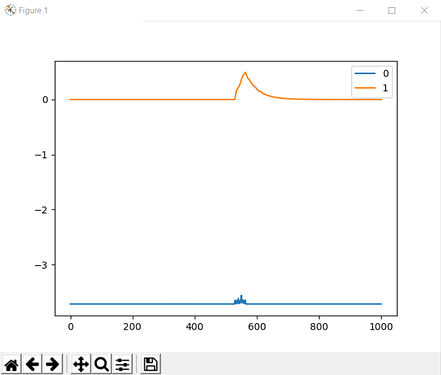 Sometimes the pos_estimate glitches - the pedals barely twitch but it reports a large turn: 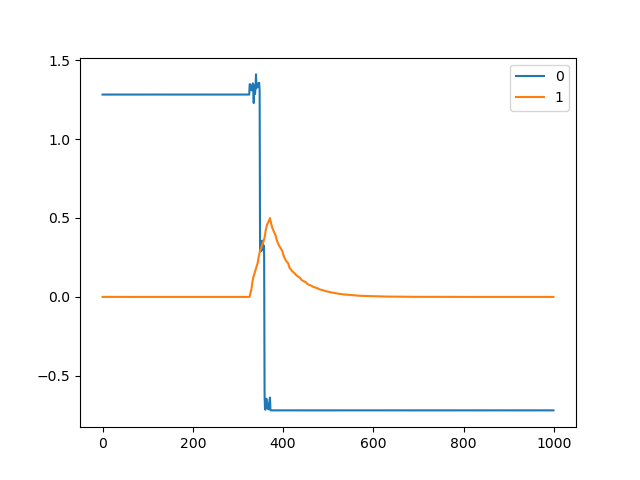 Does anyone have a clue what might be going on?

Immediately after installing the ferrite ring, that orange line was totally flat, and now suddenly it’s acting like this. I am doubting my sanity here.

Is this the most robust way to improve SPI encoder to work? So far i did a few experiments. but i think i come to the conclusion that it is a “DON’T”. 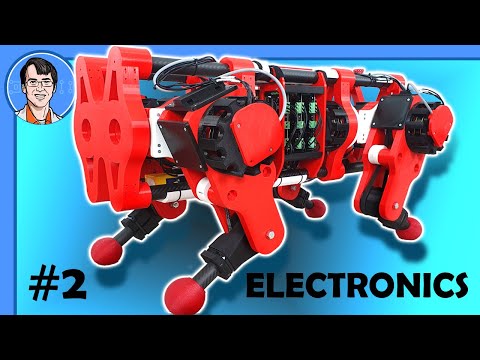 Here’s the video from the OpenDog creator. He uses AS5047 SPI Encoders on his robot with no issues at all. I asked him in the comments how he was able to acheive this, and he said that there’s nothing special, he just followed the ODrive documentation and it just works. What are we doing wrong?

I made a few tests and it seems to work with AS5047P in SPI.
I made my own board, photo and desctiption are here. I use two AS5047P encoders powered by 3.3V. First one is connected to axis0 to drive the motor, second is connected to axis1, which is not present on my PCB, but firmware reads it’s values correctly. I made this to read absulute angle after reducer to avoid homing in my robotic arm project.

I made two firmware modifications: disabled AMS error bit check and increaced max spi_error_rate to 0.1.
During idle state spi_error_rate floats around 0.007, but when mosfets engages (motor calibrtion, encoder calibration and closed loop mode) spi_error_rate drops to 0.005. It’s really wierd behavior, and it should be vice versa, but it works. I made few tests with 500W milling spindle motor, which has 2 pole pairs, and there were no issues in velocity and position control modes. I can post my further tests, if someone is interested.

Do you have ferrites on your motor wires?
Are there any series resistors in the SPI wires? (this is to prevent ringing seen in my post above: Clarification on SPI Encoders - #21 by towen)

If you are making your own boards though, I would highly recommend that you use a pair differential RS422 transciever chips if you are wiring the encoder off-board.
If the encoder is on-board, then it shouldn’t be an issue though.

Still use the ferrites, they help in all cases.

Spi isn’t really meant for this, it’s an on-board bus, not meant to go over wires.

I didn’t see a mention of the speed you’re trying to run it with but turning the speed way down usually results in better stability.

Also if you’re running it over a power supply instead of a battery, the switching noise will usually cause spi issues.

Do you have ferrites on your motor wires?
Are there any series resistors in the SPI wires?

No, I don’t use ferrites on the motor wires and resistors on SPI. The issue with spi_error_rate occured way before I was able to power the motor. Anyway, motor cables will be too short to put ferrites on them.

Also if you’re running it over a power supply instead of a battery, the switching noise will usually cause spi issues.

Spi isn’t really meant for this, it’s an on-board bus, not meant to go over wires.

Why? ODrive firmware uses 2.625 MHz, which does not seem too high. SPI signals are push-pull on all ends, so there shouldn’t be a problem with signal edges. LCDs with SPI controllers like ILI9341 uses 10+ MHz clock speed with no issues, even when connected with long dupont cables.

I soldered longer unshielded cables (about 300 mm) and captured MISO and SCK at the encoder side, edges seem to be fine.

I wasn’t aware of any differences in the GPIO pins. What’s special about 7 and 8?

I think PKav said that his motor is so close to the board that he couldn’t fit a ferrite. But TBH I agree even with wires that short, a ferrite should help.