I am having problems when I startup or reboot my odrives. I am using four Dual Shaft Motors - D5065 270KV with AMT10 encoders. The errors don’t happen on every motor on every startup and reboot but of the four motors at least one will throw errors: 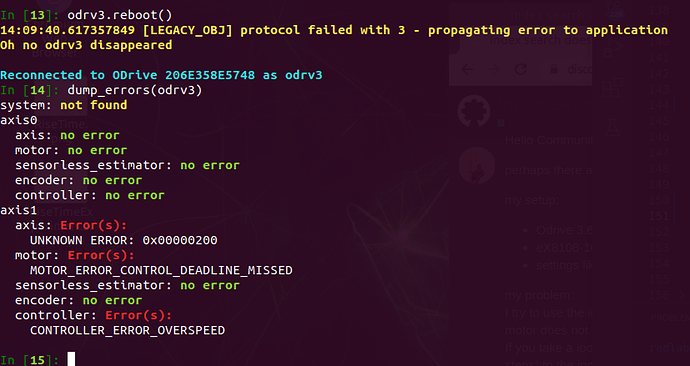 I have confirmed wiring is correct. It does not enter CLOSED_LOOP_CONTROL on startup. It does do an index search on startup but no other startup calibrations. And I only get this error on startup not during operation.

Set controller.config.vel_limit or its threshold higher. Or you have encoder line noise causing the estimate to jump around.

My vel_limit is set to 20, and I can’t set it any higher because of the mechanical limits of the attached worm gear. If it is because of encoder line noise should I add capacitors as directed in the hoverboard guide?

Update: before rebooting I was trying to use odrv3.clear_errors() but I kept getting the error : 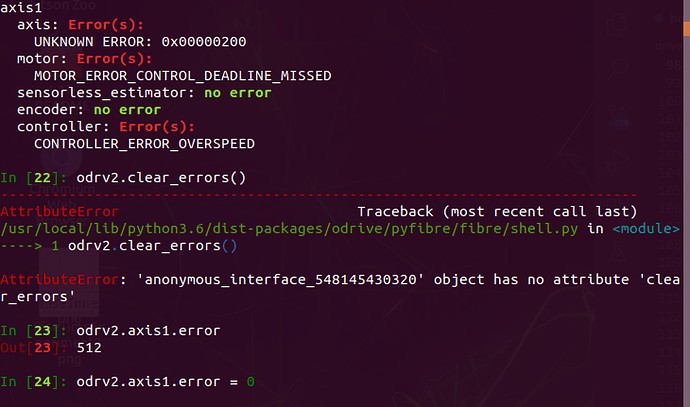 I figured out how to individually clear the errors, then I rebooted, ran motor calibrations, and everything is working at the moment. I am still confused why clear_errors() doesn’t work?

Not sure, tbh. Keep an eye on it I guess.

Ah ok, were you calibrating with a load attached?

Yes, there is a permanently attached load