Hi,
One of my 5 ODrive has problem in encoder interface.
I’m using HW version 3.6, and 56V.
Firmware is 0.4.11.0. I downloaded compiled image from https://github.com/madcowswe/ODrive/releases
I’m using two hover board motors and integrated hall sensors. Capacitors are soldered to each hall sensor line(just below J4 header).

After power up, all hall sensor signals are like this. It works well. Signal is taken at J4 encoder header. 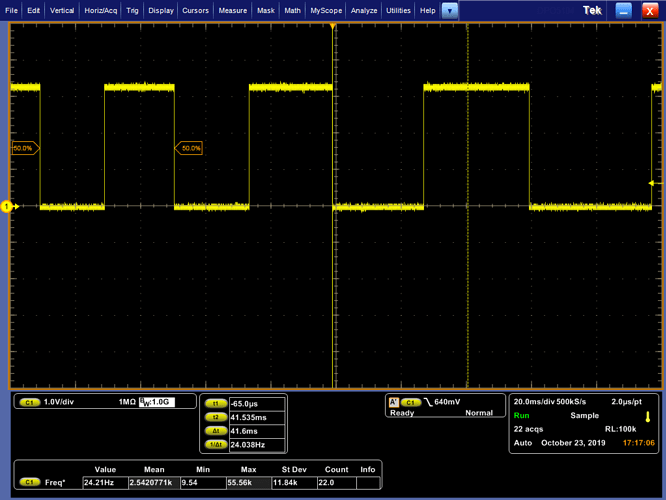 After drive motor some, the signal is corrupted like this 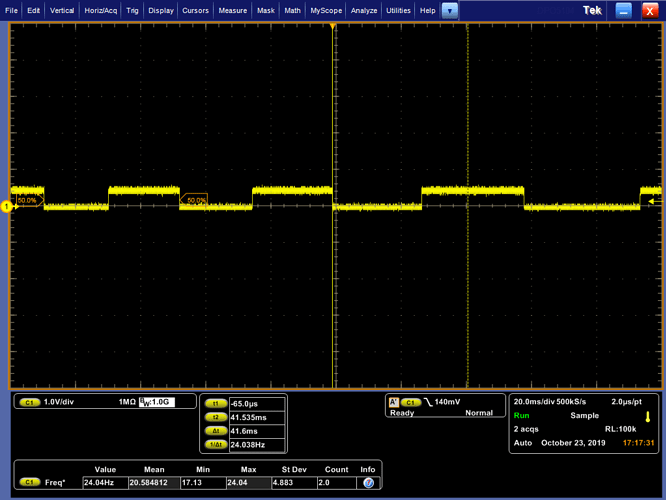 Tested with another motors and same problem. So motor or hall sensors are not suspicious.
I changed with another ODrive(same version) and it works good.
I think next step is replacing MCU.
Please give me any advise or suggestion.

Thank you for your concern.

First, both axes have problem.
But signal is different.
axis0.Z, axis1.A, axis1.Z signals are corrupted while others are good.
The time to get problem is different for each signal. For most cases, axis0.Z is corrupted soon and axis1’s are later.
Early in the morning, it takes longer time(about 1 min). As I continue inspections it gets shorter and eventually it is corrupted from boot time. And next day it starts from 1 minute.

Is it possible that one of your capacitors has failed? Dendritic growth? Tin whiskers? Are you sure they are capacitors?

“Nice” soldering job, but I would try removing them and see if you get the same low-signal issue as measured on your scope.

Also, I suppose it is possible that there is a short on one of the other pins, which is configured as an output, but is shorted to ground and is pulling the whole port low. Check the schematic for any suspects.