Just a little encouragement. I’m waiting on the sidelines until it is possible to reflash via USB then I’m buying in. I’m sure there are a lot of other people like me who don’t want to go down the “setup-the-dev-environment” rabbit hole. I did this with early VESC but it’s so much more civilized to be able to push a button in a UI…

Thank you for the encouragement! I have also heard from other channels the same, so this is indeed a high priority milestone.
Thanks for your support ;D

I’m super excited about this - I have a giant CNC machine (Bertha 2) that is running on steppers only because servos are so expensive. I worked on an electric longboard project a couple of summers ago so I have a whole box full of (probably incredibly overpowered) outrunners ready to go

@madcowswe, is there any update on this feature?

Yep! We have a DFU (Device Firmware Upgrade) over USB feature ready, and we also have the ability to set all settings over USB, and store them to Non Volatile Memory: so no compiling should be nessecary. These features are expected to be released in firmware version 0.3.6, which I expect will be in a week or two. You can check for them here.

Fantastic! I’ll keep an eye on it.

Looks like 0.3.6 is released! If I order today will the device I receive be loaded with this firmware?

Yes all boards v3.5 and newer will be preloaded with the latest firmware, or at least provided with a way to very easily upgrade the firmware.

Unfortunately we just sold out of ODrive v3.4, and v3.5 won’t be ready for several weeks.

Hm I don’t think the website will let you put in an order, it will just say it’s sold out. I will make a preorder available as soon as I know v3.5 is ready for production and I have a leadtime.

I’d like to put in a preorder too, but I can’t find a changelog or something similar for V3.5. Is there one up yet?

Ah yeah I haven’t published it yet since we havn’t finished validation, and we don’t need people getting issues before we even finished with that. Anyway, subject to change with final version:

Speaking of which, this is fresh off the LitePlacer and will see first boot tomorrow ;D 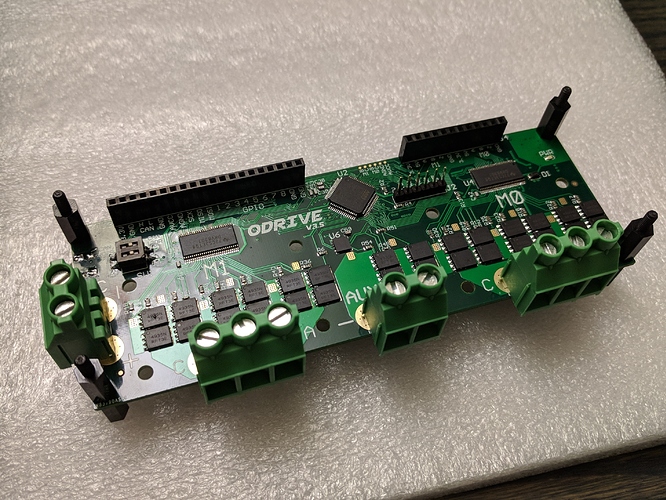 4 posts were split to a new topic: Using the LitePlacer

Also ordered. Thanks for the update!