We are working on a robot with oDrive controller and 2 hoverboard motors. In order to configure the motors, we’ve been following the steps explained on the tutorial (https://docs.odriverobotics.com/hoverboard) and everything is working perfectly. The problem comes when creating the next script for controlling both motors: 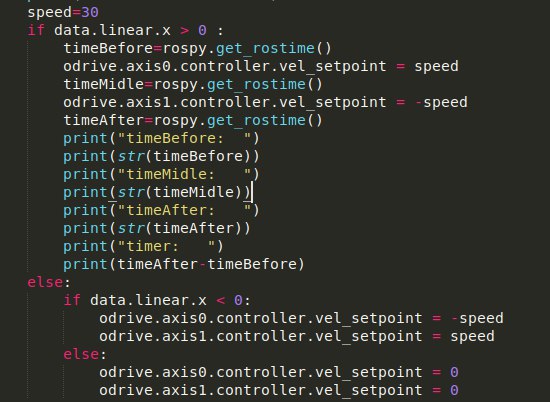 We are having trouble with the time that goes from the moment the velocity for one motor is set to the moment it is set for the other motor. It is too high, even if we set them immediately one after the other (times in nanoseconds):

As you can see, there are times that the iteration lasts almost 2s, which is too much time for our project.

Our question is if this is the best way of approaching the control of the two motors or there is a better way.
Thank you so much in advance.
Greetings,
Mario.

Hmm. I have never known there to be any delay like this in changing setpoints.
Do you have the same delay using odrivetool? If so, what version of both odruvetool and the firmware are you using?

Do you have USB bus contention issues? e.g. are you sharing the same USB root hub with a bunch of USB 2.0 cameras?

If on Linux, check the output of ‘dmesg -w’ while running your script.

For me, in odrivetool it takes less than 1ms to set both axes:

For anyone in the same situation, we discovered the problem was originated by the communication with serial port in a ROS callback coded in python, it added too much delay. Once we changed it to c++ with ASCII protocol everything went just perfect: almost no delay.

Thank you for your help!