I’m getting an issue with the uart between two odrives and an Arduino mega.

After a trigger/event all serial communication to one or both odrives results in a timeout.

The event that triggers it has something to do with reading data while the motors are enabled and moving, but I can’t pin down an exact cause.

Anyone got any ideas?

Noise or improper grounding. Make sure all of the logic grounds are grounded on J3. You may have trouble with communication anyway if you’re powering everything off the same battery…

thanks for the reply.
the arduino and odrive have a common ground.
the arduino is powered from a seperate sorce to the odrive. (separate battery or pc)
i cant do much more about noise unless your recommending a shielded cable for the ~100mm between boards?

how reliable is the step/dir input method?
does anyone have code i can work off of that’s more feature complete than the example code?

replaced the serial line with shielded cable and grounded the heat-sink. seems to have solved the issue.
thanks for pointing it out, wouldn’t have thought it would be that noisy at such low speeds/power on such a short cable.
its all happy running from a common battery now too.

I think i am experiencing the same issues as you. I’ve got some shielded cable on order which i’m hoping should help.

Would it also be safe/helpful to join the two grounds of the different PSUs? Here’s what the circuit set up looks like: 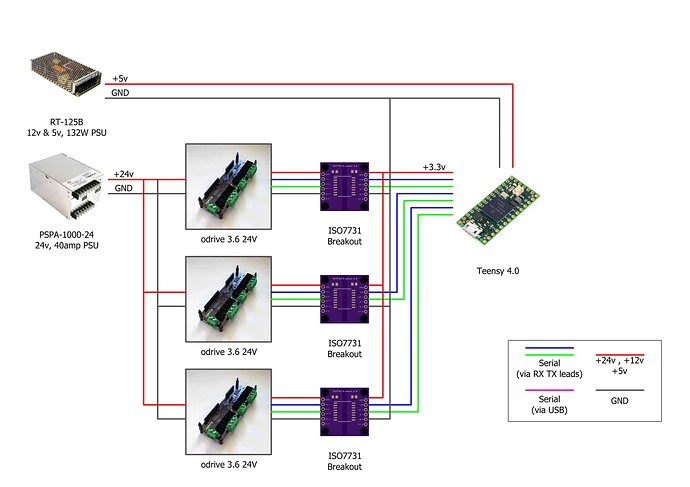