So I have a CNC milling machine here that has a blown servo drive…
Since that servo drive is nearly 35 years old now it has become extremely hard to get documentation and pretty impossible to source replacement components I have been thinking about converting its drive system to something more modern… As this is a hobby machine (for me, anyway) I was looking for alternatives to a full blown industrial servo drive solution with new servos, so ODrive crossed my google. The questions I have though might be pretty basic, but not having touched the kind of hobby motors it relies on, or the drive itself, I have no way of answering them myself. So… does anyone have experience with hobby motors in fairly big industrial machines (my Mikron weighs in at about 1.7 tons)?
Secondly, does ODrive allow for motors with built in brake for a Z axis table? This one is fairly important, as without a brake the table would drop down when its not being held by the motor, and even when the motor is holding it the varying cutting forces might cause it to move, while also causing the motor to heat up and potentially turning it into a charred lump of copper and magnets in the process.
I also don’t have any idea about the constant power rating of the drive itself (can’t seem to find that anywhere), and I have to say I’m fairly skeptical when it comes to comparing its heatsinks to those found on industrial gear.

What am I hoping to get out of this? A working mill with hopefully faster travel speeds when not cutting, and not blowing up in my face, electronics wise.

Any input on this is appreciated.

Hi,
can you post a picture of the motor nameplate?
Do you know the voltage of the dclink?

I can’t get at the machine right now, it’s in storage 300km from here until a decision on the drive system can be made, but judging by the schematics of its servo controller it’s running them at 140V, max. 45A DC

Sounds like an old DC motor setup, probably with glass scales on the axis and tacho on the motor.
Whats your plan for the Controller?

My plan for the controller was initially to repair it, which is why I have most of the boards with schematics here, but since I can’t source one of the components that has a hole blown clean through it the course of action is going to be to scrap it. Out with the old, in with the new.

Brains wise I want to give it a Mach4 computer, probably a CSMIO and drive wise… not sure.

To answer some of your questions:
RC Motors:

Hmmp. There is only so much one can do to shield a motor from chips and cutting/cooling fluid, especially if cooling is supposed to be a thing. Holding the table should of course be done by the motor, but for prolonged machining in a single plane there should be the option to close the brake to keep the motor from cooking itself, as I believe this servo drive on the WF3 does.

Regarding the scales, I was planning to loop them into the CSMIO directly, so it has feedback about the position for rigid tapping, while the drive keeps track of where the motors are vs where they should be and can still throw a fault to stop mach running through its cycles.
Speaking of… can ODrive report faults upstream?

On the high voltage AC or DC drives:

Note on the controller:
If you are not sold on Mach4 you can look at LinuxCNC, it’s much more versatile and has better hardware options.

afaik CSMIO closed loop does only work with drives that support analog velocity command.
Where are you from?
I guess somewhere in europe, as Mikron was manly sold there. 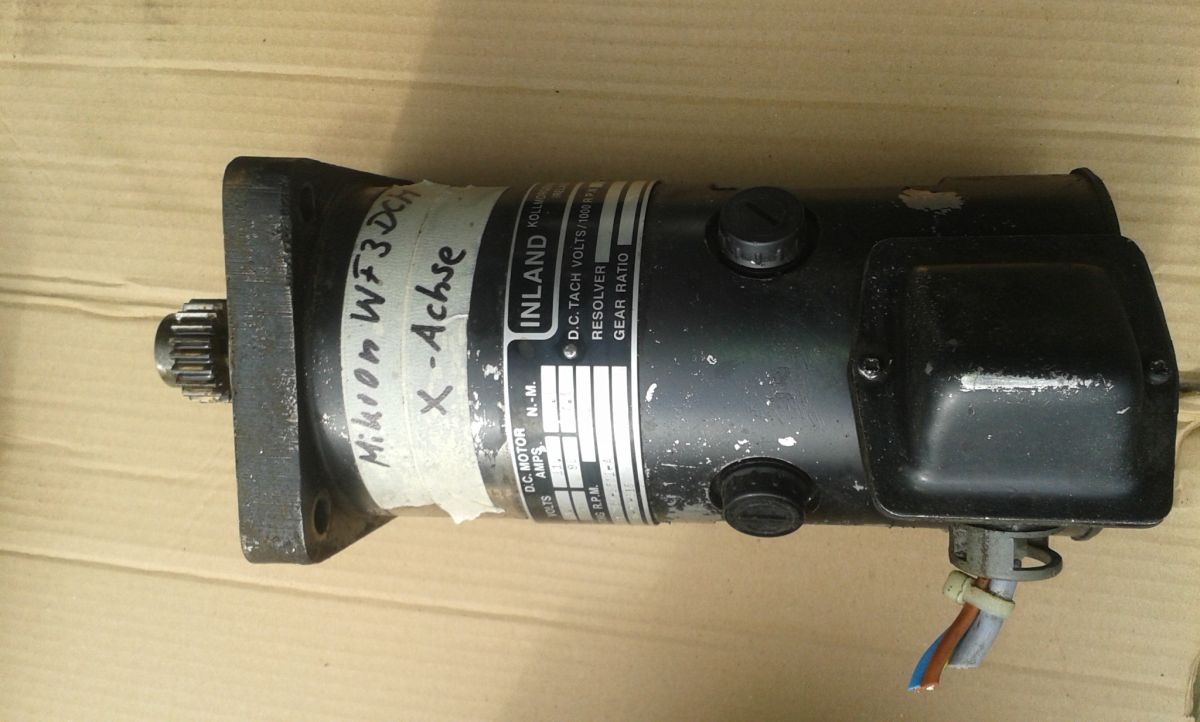 This would be a DC motor with dc tacho.

I’m sitting in Germany, to answer that question.

A note on the controller: I full on plan to go Mach 4 because it aims to be close to full fledged industrial controls.
Currently the machine has a Heidenhain TNC150 series for brains.

The less I have to replace on this thing the better, except for the controller, because I do like the ability to load in code in via USB.
The idea of simply hooking up ethernet and power to the control cart I want to build (the arm is going to go) sounds really appealing.

Than i recommend using the old motors + supply + STMBL.
We are from germany too, so support is a bit easier.

Personal opinion: Mach4 is not a “full fledged industrial control”

If you can solder the UHU + encoders on the motor would be an option too.

Using the original supply is going to be a little hard, it’s part of the servo drive and took some damage in the drive blowup event. It’s also probably going to be fairly convoluted to either adapt your drive into the housing and into the backplane of the original Bosch transistor amplifier (as this thing calls itself) or somehow make the supply board function on its own. The way I understand these schematics the supply is spread out across two boards, if not more, but I might be wrong.

I know that Mach4 is not a full fledged industrial control, but it does run on windows, which allows me to run Fusion alongside with it when its not running the mill.

Soldering is an option, but I’d like to reduce the amount of fiddly work on this to actual work on the mill, bought solutions with support are worth the extra few bucks if it saves me a headache or three.
I have my multimeter license, but lack programmers, oscilloscopes or other fancy gear, and I can’t bring my benchspace at work to my mill… or vice versa, so debugging in place is ruled out.

That would be the preferred way. Plus 3 drives with whatever supplemental electronics they need plus the CSMIO + supply.

No ODrive for this one then. Welp.

Considering the desk I built for myself, I’m fairly certain I could put the WF3 on my desk.

Coincidentally, that’s what my WF3 is sitting on right now too.