ODrive 3.5 Not recognized by Windows

I got my ODrive 3.5 this week, and have spent the weekend learning how much I don’t know. After having some difficulty getting odrivetool installed in standalone python on both windows and ubuntu, I was able to get it installed with anaconda3. Next step: connect the ODrive to the PC and install the driver. However, When I plug the usb cable into the ODrive and the windows machine, I get no new hardware notifications, and nothing new shows up in the device manager. zadig does not list the ODrive either. I have tried this on two different computers, with 2 different cables, and with and without the power supply connected (the getting started guide is a bit ambiguous on whether this is necessary). What am I missing?

This was the first batch of ODrives where we flashed the firmware on before sending it out. Our process is not so mature for this, so it could be the case that we have missed to flash your board.

Can you try to while powered off move the dip switch from “RUN” to “DFU”; then plug in USB, then apply DC power? If something shows up in device manager, you should be able to run odrivetool dfu to flash firmware. Then unpower, set back to “run” and then hopefully it’s solved.

Thanks, I’ll give it a shot tomorrow.

So, the board does go into DFU mode, and is recognized by windows. However, odrivetool dfu doesn’t flash the firmware, but just starts the tool:

I’ll try in ubuntu in a minute and report back.

Edit: I did go through the troubleshooting steps provided. The board shows up in device manager under “libusb-win32 devices” as “STM32 BOOTLOADER”

However, odrivetool dfu doesn’t flash the firmware, but just starts the tool:

I just made a hotfix to fix this issue on Windows. Can you get the new odrive package and try again?
pip install odrive --upgrade --no-cache-dir

ValueError: The device has no langid

Can you please log an issue on github about this? I’ll take a look when I get my Ubuntu machine up.

Thanks for the help and the hotfix.

The initial attempt to flash failed to automatically download the new firmware version:

I tried “make write_otp” at the prompt, but the term ‘make’ wasn’t recognized. I downloaded the firmware .hex and tried again without programming the board version:

Does the board version need to be written for the tool to work? If so, could you point me in the right direction to learn the implementation of the “make write_otp” command?

After changing the switch to “RUN”, the board was recognized by windows, and I changed the driver to the libusb-win32 driver

Running odrivetool again, the board was still not recognized by odrivetool.

Hmm so in zadig you changed the ODrive 3.x Native Interface (Interface 2), not the other one? You shouldn’t need to write the OTP for it to show up. There is about 5-10s delay from starting odrivetool until the ODrive should show up.

If none of the above works, hit me up on Discord and we can do a remote session and I can take a look.

Hmm so in zadig you changed the ODrive 3.x Native Interface (Interface 2) , not the other one?

Nope, you got me. I changed the driver on Interface 1, and didn’t see the other one or pay enough attention to the getting started instructions. Thanks again.

2 posts were merged into an existing topic: Cannot flash firmware

I wanted to add my experience for reference.

I was not able to communicate with the Odrive at first. If I switched to DFU mode, the Odrive would appear and I could talk to it (I think - I may have had to use Zadig). However the odrive dfu tool would give me various errors - I do not believe any firmware was installed.

I then tried to use the DfuSe tool per these instructions to install the firmware. However, the tool could not see the odrive, so I had to uninstall the driver (while checking the delete files box). Windows would not automatically install a correct driver, so I used the driver from the DfuSe install per these instructions. Once I had this driver installed, I was able to flash the firmware then follow the normal procedure (switching back to run mode, then using Zadig to change the driver for Interface 2).

I have the same issue now, My Odrive v3.6 also not getting detected by windows using anaconda. I was updating firmware and then it went to STM32 boot loader, I had set the driver "STM boot loader " to libusb-win32 in Zadig utility then I installed the driver. Then the odrive is not detected. It didn’t show in Device manager I have checked with switching to DFU from RUN and STM32 boot loader is detected in device manager and I ran the command odrivetool dfu, then I disconnected and switched to RUN and checked device manager but it is not detecting. Is the drive dead? or any other issue?

Try flashing with an STLink V2, it should revive the board

Thanks, I will try flashing with STLink V2 and I am getting an Index error 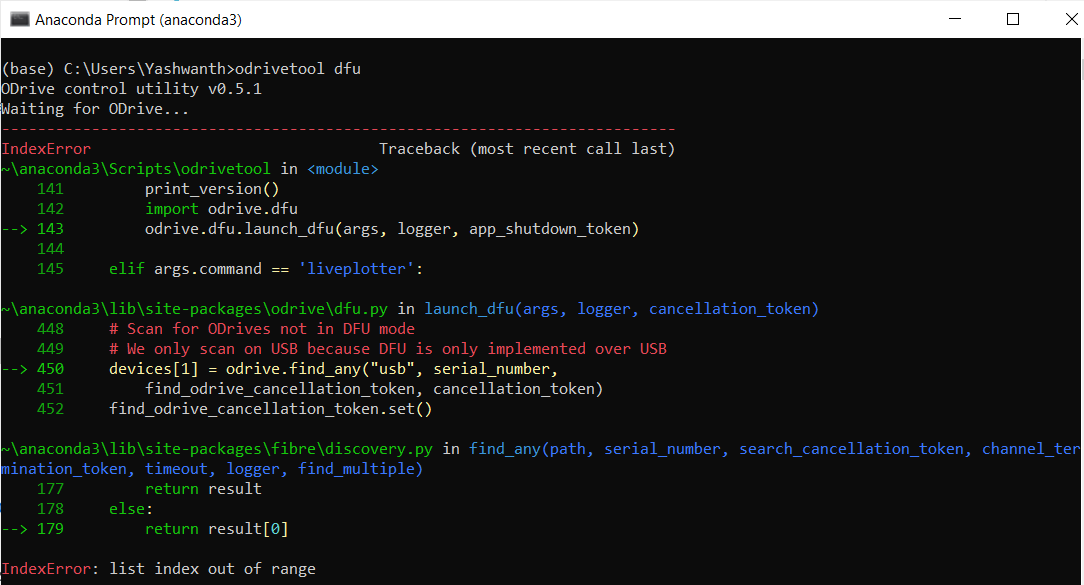 This is a bug in odrivetool which occurs when the ODrive is already in DFU mode when you start it. It is fixed on the devel branch. You can manually apply the fix by editing C:\Users\Yashwanth\anaconda3\lib\site-packages\fibre\discovery.py line 179 with the change in the link above. 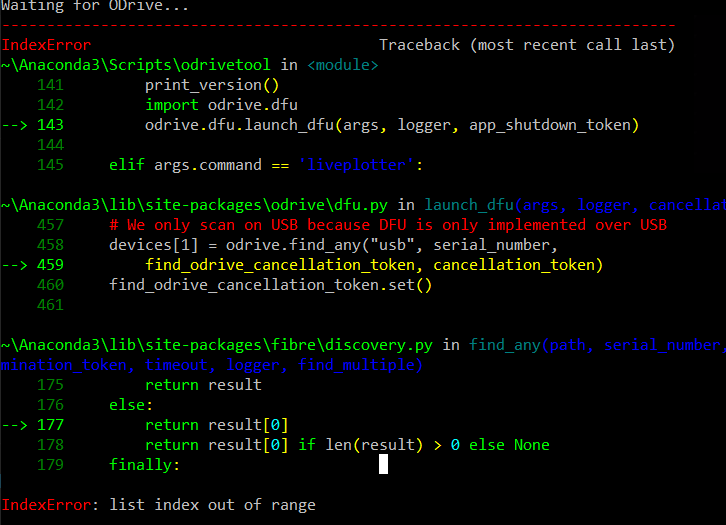 this fix results in this error.

Line 177 would need to be removed.
In any case, this fix is now officially published. You can install it with python3 -m pip install odrive --upgrade.