Hey everyone,
I was programming my 65V ODrive recently and unplugged it since I needed the usb on my computer. When I tried plugging it in again Windows said the device could be recognised. I tried replugging in, uninstalling the drivers which failed (it previously worked with the zadig tool) and tried flashing the chip again using the stlink but it wouldn’t even flash (the programmer connected but it threw an error when ttrying to reach the chip. The 5V and 3V rails were nominal so I replaced the microcontroller with a fresh one I had lying around but I got exactly the same result.

At this point I have no idea what to do but there is definitly something odd happening that I am missing.

Thanks for your help in advance

OK, so I have since managed to solve my issue with a little bit of help from this thread

I think the problem was that windows somehow tried to update the driver or it reinstalled a different one. The important thing is not to uninstall any drivers. You need to switch into DFU mode (I just flicked the DIP switch on the board) and then using the zadig tool to replace the bootloader driver to the correct one (mcdowse posted a link to how this is done in the thread I linked). If you have uninstalled the previous driver this may fail, at least as I experienced it.
Next flick the DFU DIP switch back to RUN and flash the chip using a st-link-v2.

That should now work again and you should be back up and running.

Here are some of the problems I screenshotted so if you see any of the situations below play out you may need to follow the above steps to get you odrive to work again: 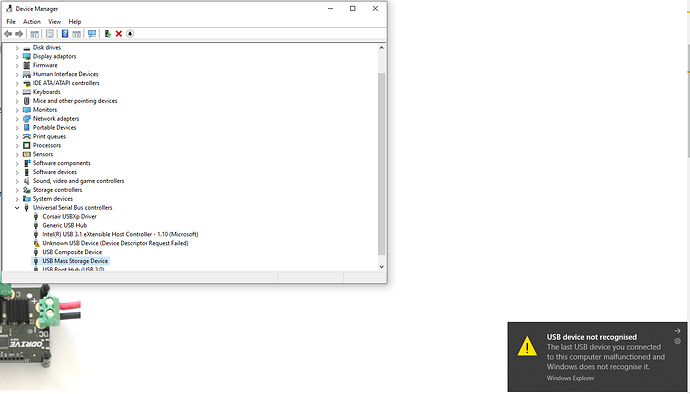