I have been working on building a serial controller to send the ODrive serial commands, and I seem to be running into an issue with the serial connection every once in awhile.

My goal is to be able to run a system using the setvelocity command being able to send a command at most 20 times a second. I am running into an issue while sending commands at around 2 or 3 commands a second with the serial seemingly timing out. The motors stop spinning, and I can’t send or receive anything to or from the ODrive.

Is there a checksum that I can look for after sending a command to check to see if the command was received before sending another?

Hi,
may be you have the same problem.

Hi all, I try to connect the output of a simulator software to ODrive. My setting is a 3.5 board with the latest devel branch. Connected is a KEDA motor with mounted AMT102. The startup sequence is running fine and the motor resposes to the commands through a serial connection. Everything looks good till this point. This is the UI of the simulator software: [grafik] As you can see, the software sends a initial positioning command, waits for 1 second and starts to send positions every 50ms…

Thanks Zennix. It appears that I missed that in my research on the issue.

Since it hasn’t been resolved in the firmware as of yet, are you continuing on with the commented portion fix?

Also, anyone know how high the priority is on this fix?

I’m testing with the commented out section. I do not need to write parameters in my project.
Hopefully it will be fixed in the next month. But madcowswe can answer exactly.

So are you precalibrating the motors or having them autocalibrate on turn on?

Also, are you editing the code using vscode or eclipse?

I’m using the autocalibration at startup. But I have no load now, should change in future.
My OS is Windows 10 and my tool is VScode.

I will check into setting up VSCode to modify the source code. Although, I think I am going to start up a similar project using python until there is a fix for the issue.

@wayneStock Are sending serial over the USB CDC interface, or over UART?

I was using the USB CDC Interface.

There is bug we are working on fixing which means that there may be collisions between the two interfaces.
Can you try to disable the native interface in device manager?

I will look into it, hopefully by the end of the weekend.

Thanks for looking into it.

I also attempted to test the serial communication again by disabling the native interface. It appears that the communication still breaks. I decided to lower the rate to about 10 calls a second; and it still breaks after a bit.

Okay thanks for trying. I have made a separate issue on github to track this.

Can you guys help me out with some details that will help me to reproduce the issue here? What is your OS, what commands are you sending? using what program? Other details? Thanks! 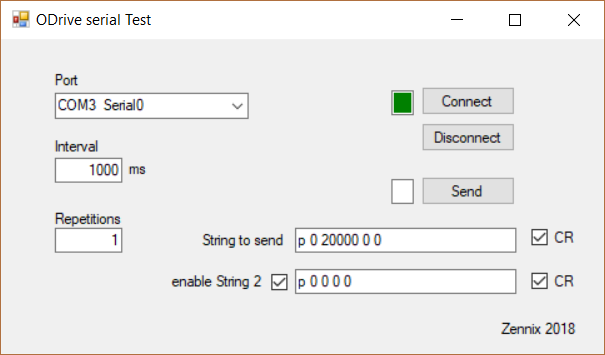 Do you have the source for this program, so I can dig in in case I need to?

I will work on getting you my program as well.

What’s the status on this?

I’ve been struggling with faulting serial on my Ofrive for a few weeks and finally realized that it’s on the ODrive side.

Anyway…any quick fixes? I’m talking UART via arduino and using the example program as a guide.

Is there a way to make it wake back up? It crashes my robot and I have to do a reboot.

I haven’t tested switching to say Idle mode and then back? Does anyone know if there’s a hack work around? Or some command that can re-establish the serial connection.

Did you solve the problem?